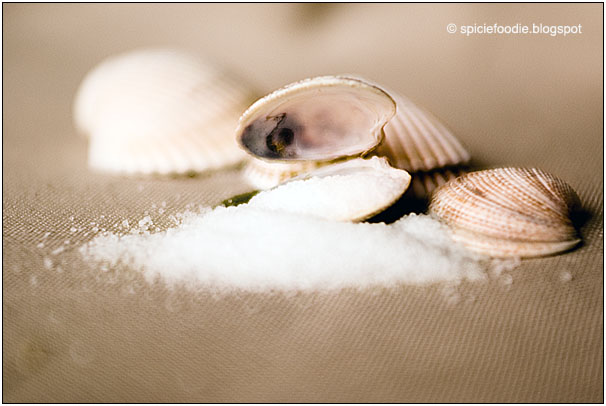 Salt is not just a simple rock or mineral found on all of our tables and kitchens, it’s so much more than that. Sodium Chloride or more commonly know as salt is an essential part of human life and needed to maintain good health. Salt comes in rock form from underground salt deposits left by ancient dried up seas, or above ground in evaporated sea beds. It is also found diluted in sea water, that is then separated in ponds and left to evaporate. There are many different types of salts with different uses textures and grains, all of which have been used by humans since cave man days. Early on humans discovered the many uses for salt,mainly as a flavor enhancer. One of the most important uses which has had a major impact on civilization was in using salt for preserving foods. This allowed the people to enjoy foods year round not only based on the seasons which they were available. Salt also became part of religious rituals , art and folklore. It become so valuable that large trade routes appeared creating economies for many cities, which then led to cities and countries fighting for control of the salt routes- salt wars.

Salt is the oldest know food additive, when used for preserving food it draws out the moisture and slows down the growth of micro-organisms. When added to food it helps balance bitterness by neutralizing the acidity and it helps bring out the other tastes and flavors. Processed foods have a higher salt content than fresh foods because more salt is added to help maintain colors,taste, smells and textures. Outside the kitchen salt also has many uses, in cosmetics, to soften hard water, cleaning agents, clothes dying, deicing roads, and the list is endless.
Salt is not only essential in our kitchens and homes, it is essential to human and animal life. Humans are instinctually drawn to the taste of salt, because without it we wouldn’t survive. Salt’s main function for our bodies it to helps maintain fluids in our bodies and balance electrolytes that send messages to our muscles and nerves. But just like anything else too much salt is bad for our bodies and can cause high blood pressure and heart problems. Be an informed consumer talk to your doctors and read food labels. Try to avoid too much salt specially high in processed foods, one simple way to remember is any salt compounds contain the word “sodium” like Monosodium glutamate (MSG)- but also baking soda and baking powder. We can use spices and herbs to replace too much salt in our diets.
Ignorantly I thought I knew enough about salt and what it was all about. I think salt is one of the things humans just take for granted without realizing how important it is and how much impact on our societies and cultures it has had. As I began to research salt it became apparent how little I new and how much history and how interesting it actually is. I read and learn so much, the most interesting being that our blood has the same chemical balance of sodium, potassium and calcium found in the oceans. I even learned a new roasting technique,(salt crust roasting), which I can’t wait to try. There is just so much to learn about salt that this post could go on and on, but it wont :).
Update: September 2009 : This photo won the September’s edition of DMBLGIT for the Originality Category.!

« Pork Tacos Cooked in a Spicy Green Chili Sauce
Indian Curry: An Epiphany of The Senses »