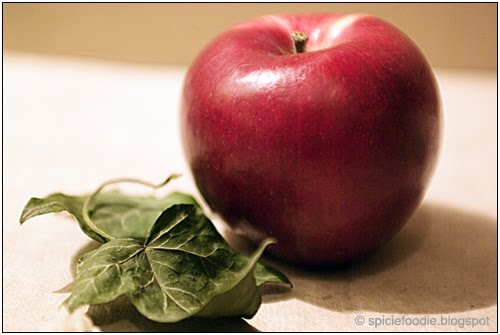 When I was growing up one of my favorite breakfast was my mother’s oatmeal. It was especially a favorite of mine after we moved to the northern US and experienced really cold winter mornings, it was a great way to warm up and get the day started. I always heard people saying that they hated oatmeal and how disgusting it looked to them. I didn’t understand because my mother’s oatmeal tasted so good. I came to the conclusion why others hated it, they made it with water…..yuck, you have to make it with milk, whole milk is even better. Mom’s oatmeal was cooked slowly with whole milk, whole cinnamon sticks and just a bit of sugar and it was amazing!

Apples are in season right now and I’m taking full advantage of it. I bought a 2 kilo bag and the first thing I made was my favorite Apple Cinnamon Raisin Oatmeal. I started making this oatmeal as an alternative to the prepackaged one that I loved but were to sweet for me. This tastes much better and is healthier than taking in all that sugar and preservatives. 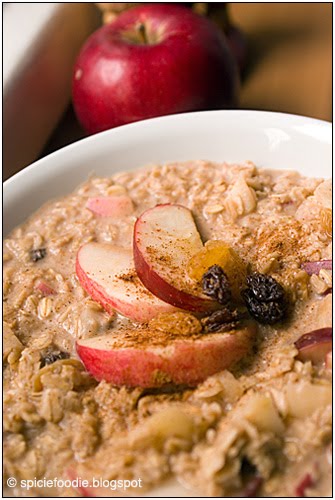 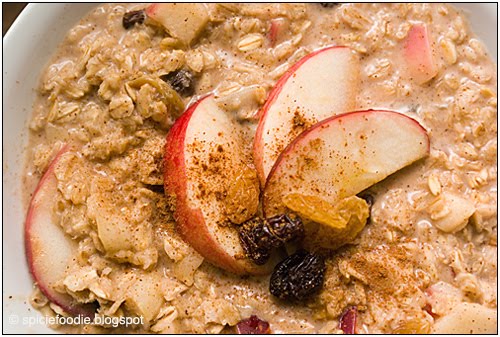 Some fun facts about apples: Apples are a member of the rose family , Newton’s law of gravity came to be thanks to a falling apple, they are low in calories, high in dietary fiber, good for your heart, good for your lungs, they originated from central Asia, where brought to North America in the 1600s , there are over 7,000 varieties, the peel is full of antioxidants, you can play games with them, they are so cool that a computer company and a record company use their name, and you can also be tempted with them – well they are delicious after all ! 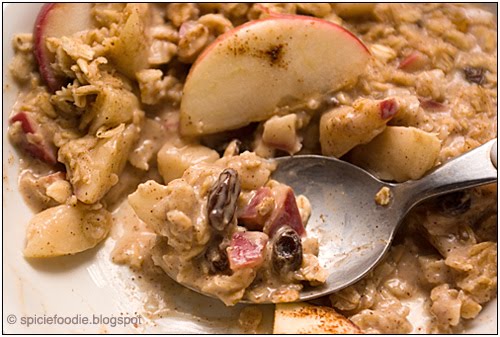 I still have about 1 1/2 kilo left, I guess we have some eating and cooking to do. I can make apple bread, apple salad, apple sauce, apple butter, apple…. wait I feel like Bubba in Forest Gump, shrimp gumbo, lemon shrimp, shrimp stew……..

*Update ~ October 13 2009 : Apple cinnamon raisin oatmeal is the featured meal of the day on HHM* 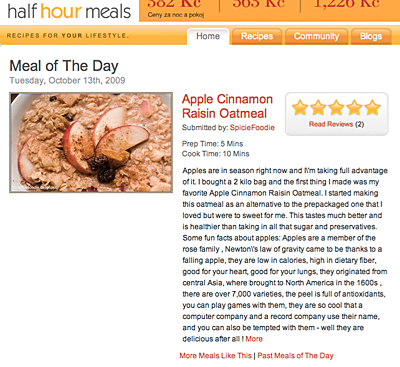 *Please note that the measurements for the sugar and the cinnamon is what I use, but you can adjust to your taste. I think that the sweetness from the apple gives it enough sweetness and doesn’t require a lot of sugar. Sometimes I add a bit more milk for a thin downed or runnier version.*
Apple Cinnamon Raisin Oatmeal