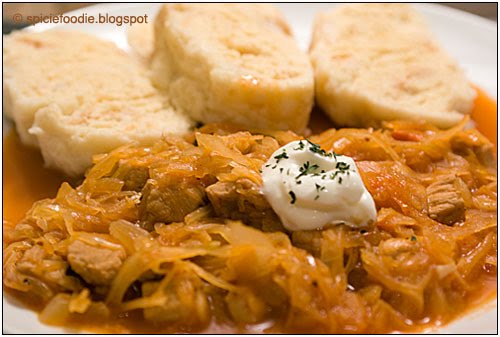 My second installment of goulash versions is Segedinsky Goulash. It is a goulash made with pork and sauerkraut( sour cabbage) as the main ingredients and served with knedliky. This goulash doesn’t seem to be as popular as other versions. If I remember correctly we have found it only in 1 restaurant. But my husband first discovered it by buying it pre-made from our local grocery store. I tried to search for some background history on this goulash, but unfortunately I came up empty handed. They only thing that I really noticed or learned was that this may not in fact be a Czech goulash but instead a Slovakian or even Hungarian goulash. I’m not 100% clear on this, but it would make some sense as to why it’s not as easy to find, and the fact that all goulash originally comes from Hungary . I’ll have to do some asking around.

Either way this was a very good dish,that is very fast and easy to make. It would make a good weekend dinner when you have extra time to allow it to simmer longer. We both loved it and will for sure be making it again, soon. 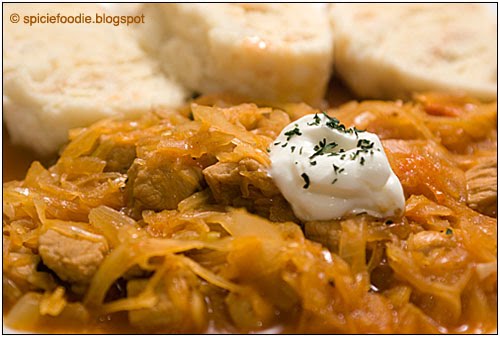 1. Cut and prepare the ingredients, dissolve the bouillon cube in 1 cup/250 ml of water. For the pork you can use shoulder or even cutlets, what ever you have. Over medium heat, heat the oil and fry the onions until they are browned. Next add the pork and cook all the way through. Once the pork is cooked through ( 10-15 minutes) add the all of the spices and the bouillon stock.

2. Cover and cook for another 10-15 minutes, turn down the flame to a lower setting. Once the pork has become tender add the sauerkraut and allow to simmer for another 15 minutes or longer. (You can also allow the goulash simmer longer if you have extra time, remember the longer something stews the better the flavors will come together. You may add more water or stock if the broth was dissipated. ) Next in a separate small bowl pour in a spoon full of the broth from the goulash, and add the flour, mix until there are no lumps . Pour into goulash and stir well until it’s well combined,simmer another 5 minutes. 3. Five minutes before you serve the goulash add the sour cream , again stir into the goulash until it is well combined. Let is simmer another 5 minutes and serve. Serve with knedlicky on the side, and if you would like add a dab of sour cream on top. (serves 2-3) 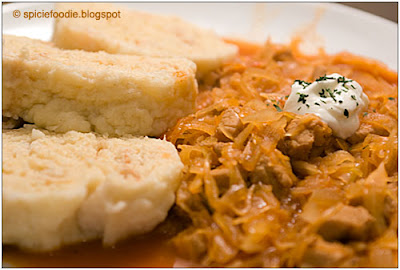